ALA TR is a whole-body, multifunctional antioxidant that helps to maintain healthy, well-functioning cells. ALA TR is designed to neutralize free radicals. ALA TR has the ability to destroy free radicals in both the water-based and lipid-based portion of cells, making it the ideal whole-body antioxidant. In addition, ALA TR helps the body synthesize glutathione, the body’s own master detoxifier. ALA TR also “recharges” other important antioxidants, such as vitamins C and E, and CoQ10, giving them the ability to continue fighting free radicals for extended periods of time. Unlike regular alpha-lipoic acid, ALA TR’s patented, controlled-release formulation provides extended protection. In addition, biotin supports the function of alpha-lipoic acid in regulating glucose metabolism.

Alpha-lipoic acid (ALA) is an eight-carbon disulfide water- and fat soluble compound that is synthesized in small quantities in the liver and other tissues. Oral supplementation readily crosses the blood brain barrier after it is absorbed in the small intestine, goes into the portal vein, and is distributed via systemic circulation. Once in the tissues, ALA can be found inside and outside the cells including inside the mitochondria where it functions naturally as a coenzyme for the oxidation of pyruvate, alpha ketoglutarate, and branched-chain amino acids. Researchers recently identified lipoic acid’s mechanisms of action related to maintaining metabolic health. It has a direct binding site at the insulin receptor tyrosine kinase domain. ALA appears to modulate 5’-AMP-activated protein kinase and PPAR-regulated genes, to activate PPAR–alpha and PPAR-gamma, and to support expression of PPAR-gamma mRNA and protein in heart tissue and smooth muscle of the aorta.[2] Controlled-release technology supports efficacy of alpha-lipoic acid in helping to maintain blood sugar already in the normal range. Data from a 12-week clinical study indicate that supplementation with ALA TR (1200 mg per day, divided doses) may support healthy C-peptide levels. C-peptide is used as an indication of insulin sensitivity.[3,4] Alpha-lipoic acid effectively neutralizes a variety of free radicals, including oxygen radicals and ionized metals. This action is particularly beneficial for people who have higher levels of oxidative stress. Alphalipoic acid regenerates vitamins C and E, increases tissue levels of glutathione, and helps maintain the proper ratio of reduced to oxidized coenzyme Q10 in the mitochondria. In addition, alpha-lipoic acid may help the body rid itself of heavy metals. Healthy endothelial-mediated vasodilation is accepted as a surrogate marker for cardiovascular health and can be affected by synthesis, bioavailability, or action of nitric oxide (NO). Increased oxidative stress appears to play a significant role in neutralizing or inactivating NO. ALA’s antioxidant properties, along with its demonstrated safety and potency, qualify it as a prime candidate to evaluate for its ability to support healthy endothelial function.[5] The ability of alpha-lipoic acid to improve energy metabolism and decrease oxidative stress alludes to its ability to support healthy mitochondrial function with age. Biotin has been added because chronic administration of lipoic acid lowers the activities of pyruvate carboxylase and beta-methylcrotonylCoA carboxylase in vivo by competing with biotin.[6] 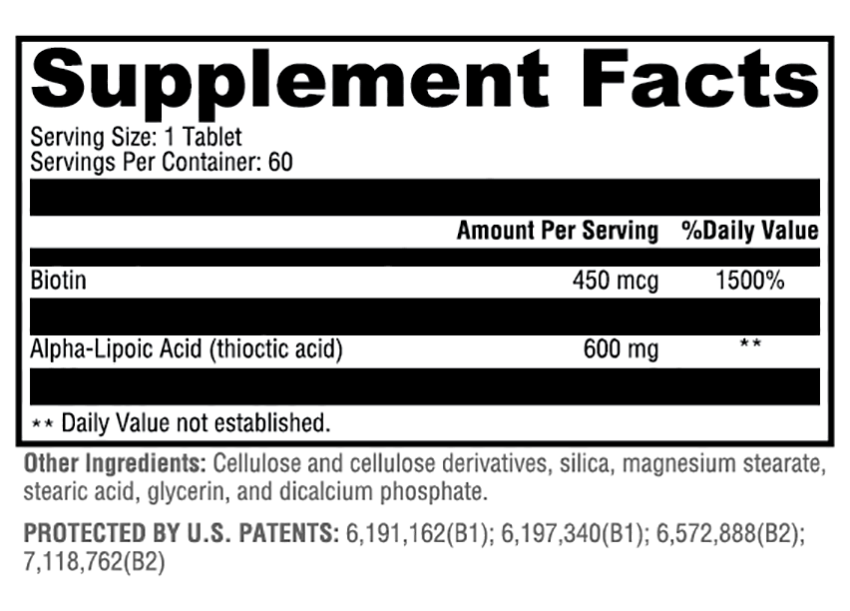