Biotic Synergy 350 features a diverse blend of HOWARU® and FloraFIT® probiotic strains to support a healthy gut microbiome. Each strain is well-researched and identity-verified and has been genetically characterized and properly classified for your safety and assurance. These strains were not only selected for their health benefits and complementary actions but also for their viability and stability.

With the 18 different strains of health-promoting bacteria provided in Biotic Synergy 350, the impact on multiple body systems and functions—such as on immunity, digestion, metabolism, and cytokine production—is maximized because different strains have slightly different functions and are concentrated in various places along the digestive tract. Using a variety of strains also mimics a healthy diet that includes foods containing live and active bacterial cultures, such as fermented foods.

To protect the bacteria from light and moisture, each flavoring- and sweetener-free serving of Biotic Synergy 350 comes in an opaque, foil-lined stick pack.

Multiplicity of microbiota species is characteristic of the GI microbiome in healthy individuals, and a loss in species has adverse effects.[1-3] Dietary diversity and taking a variety of probiotic species and strains are methods that help support a healthy microbiome.[1,4] Biotic Synergy 350 provides 18 different strains belonging to 13 different species of three different genera. The HOWARU and FloraFIT strains that comprise this formula are stable, proven, and trusted worldwide. Featured Strains: Bifidobacterium lactis HN019™ and Lactobacillus rhamnosus HN001™ B lactis HN019 and L rhamnosus HN001 have been studied extensively in vitro and in vivo (in animals and humans) to establish beneficial effects and safety.[5-20] In human research, B lactis HN019 significantly decreased mean whole-gut transit time in adults compared to placebo.[8] Supplementation also had a positive effect on functional GI symptoms, as were self-reported by patient surveys. In a randomized, double-blind, placebo-controlled human dietary intervention study in subjects 60 or more years of age, supplementary HN019 resulted in desirable changes in the intestinal microflora, including significant increases in bifidobacteria and lactobacilli.[13] HN019 has also shown promising effects on parameters of cardiovascular and metabolic health. Compared with baseline and control group values, individuals taking 27 billion CFU had a significant reduction in body mass index, significant improvements in cholesterol and low-density lipoprotein metabolism, and significant decreases in tumor necrosis factor-alpha and interleukin-6.[19] In a three week study, individuals consuming low-fat/low-lactose milk supplemented with HN019 or HN001 showed increased immune activity when compared to a milk-alone run in.[10] These increases were significantly correlated with age; that is, subjects older than 70 years experienced significantly greater improvements than those under 70 years. Researchers suggest that these results demonstrate the ability of HN019 and HN001 to combat some of the deleterious effects of immunosenescence on cellular immunity.[10] Animal studies demonstrate the ability of HN001 to support natural and acquired immunity as well as promote resistance.[17,18] More recently, human studies have demonstrated HN001’s protective effect on skin health in genetically susceptible individuals.[7,11] Other Strains in Biotic Synergy 350 Have Demonstrated Probiotic Effects in Either In Vitro or In Vivo Research: • Cause the development of inhibition zones around Clostridium difficile, Salmonella typhimurium, Staphylococcus aureus, Escherichia coli, and Listeria monocytogenes in agar assays[20] • Populate vaginal tissue[21] • Induce moderate maturation and activation of dendritic cells[22] • Degrade oxalates[23] • Increase IgA and IgG responses[25] • Reduce levels of E coli and enterococcus after antibiotic therapy*[26] • Help increase and recover numbers of intestinal lactobacilli and/or bifidobacteria[27] • Promote well-being in relation to intestinal cytokine production[28,29] • Improve gastrointestinal health and well-being when under challenge[27,29] • Help maintain upper respiratory health*[30] • Alter the fecal microbiota in obese subjects[31] • Maintain healthy fluid balance and integrity of intestinal wall[32] • Support intestinal barrier function[32] Genetic Testing, Acid and Bile Tolerance, Adhesion Each of the lactic acid-producing strains in Biotic Synergy 350 has a history of safe consumption and, based on testing, is regarded to have excellent probiotic potential.[20,33,34] Each bacterium has been genetically characterized and properly classified by independent labs. The organisms have demonstrated tolerance to low pH conditions (hydrochloric acid and pepsin at pH3 for one hour at 37°C), tolerance to bile at concentrations existing in the duodenum, and the ability to adhere to human epithelial cell lines (Caco-2 and HT-29). Adhesion is thought to be an important factor affecting these bacteria’s length of time in the intestines, their ability to modulate immune function, and their ability to take up intestinal “real estate” in competition with other organisms.[34] Many of the strains have had additional studies performed, which include testing for the following[20]:

Competitive Inhibition – The ability of probiotics to maintain a healthy microbial balance in the gut is unquestionably important to its usefulness. Probiotics produce inhibitory compounds that limit the growth of other organisms, they compete with other organisms for adhesion sites and nutrients, and they inhibit the production of toxins, among other actions. Cytokine and Immune Modulation – Microbiota are key elements in the body’s defense system. Cytokines regulate immune system function, and the ability of many of the strains in Biotic Synergy 350 to upregulate or downregulate various cytokines has been demonstrated. Antibiotic Resistance – Antibiotic susceptibility patterns are an important means of indicating the potential of an organism to be readily inactivated by antibiotics used in human therapy. Importantly, acquired antibiotic resistance or antibiotic resistance transfer have not been detected in any of these strains. 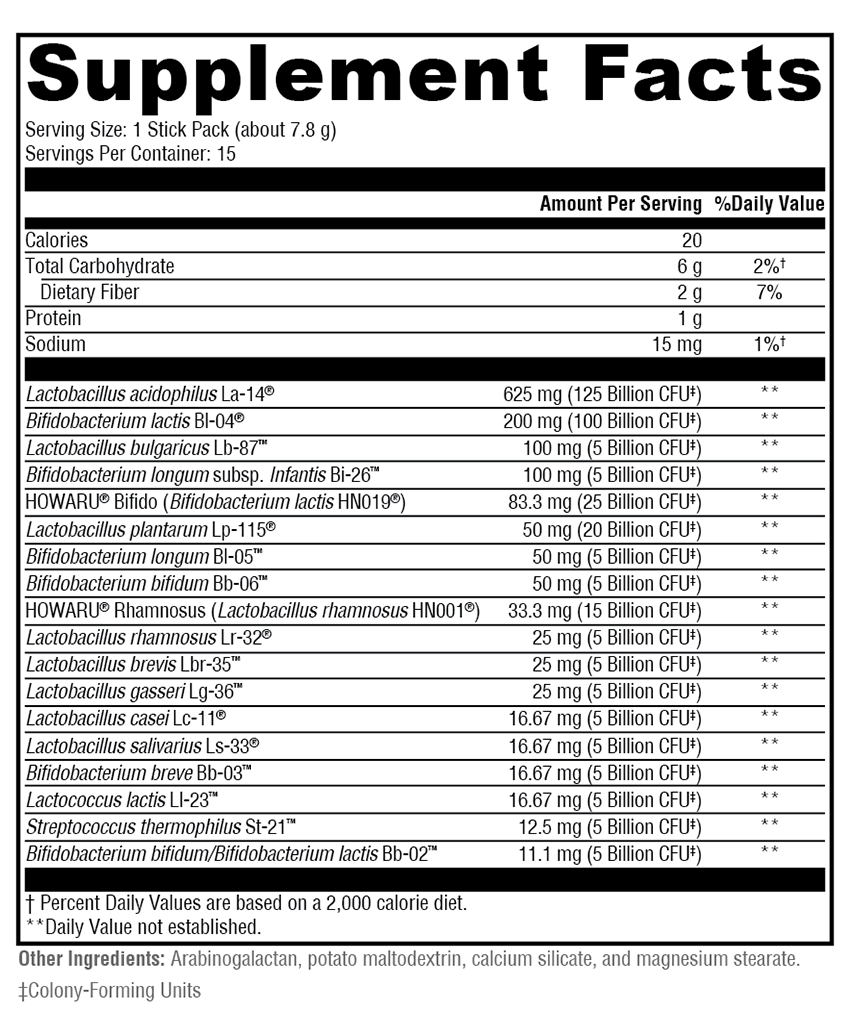