Every day, whether by choice or by chance, millions of people encounter physical, emotional, and physiological stress that can challenge the immune system. Immune Essentials™ is formulated to provide support for immune system function and antioxidant activity.[1-5] Although sometimes recommended for daily use, this formula is also effective when employed at the first sign of immune challenge.* Whole Glucan Particle (WGP), purified from Saccharomyces cerevisiae, is the same high-quality 1,3/1,6 beta-glucan. This form is considered to be the most effective[2,6-8] because it provides immune support without the impurities that can interfere with uptake and effectiveness.[3,6,9] Mannan, a potential trigger for cytokine-modulating reactions, has been removed.* Research indicates that orally administered yeast beta-glucan is processed by macrophages,[4,6,10,11] with subsequent increases in phagocytosis, selective cytokine release, and oxidative degranulation.[12] Macrophages degrade beta-glucan into small fragments that are then bound to neutrophils (granulocytes). This action primes the neutrophils and enhances their ability to eradicate microbial challenges.[6,9,13] Prophylactic administration of betaglucan promotes production of antioxidant enzymes and assists in ameliorating microbial imbalance.[5] Sustained release of beta-glucan fragments into bone marrow may affect white blood cell recovery, a unique mechanism of action exhibited by the beta-glucan found in Immune Essentials.*[14] A randomized, double-blind, placebo-controlled trial was conducted during the peak of seasonal immune challenge. Subjects receiving 250 mg of WGP had a significant reduction in the number of days in which signs of immune distress were experienced.[15] A 12-week, randomized, phase II, double-blind, placebo-controlled trial of 1,3/1,6 beta-glucan from S cerevisiae confirmed that long-term use was well tolerated and supported immune system function.*[3] Olive Leaf Extract, from the traditional medicinal plant Olea europaea, has been shown to possess an array of healthful attributes, including antioxidant properties and effective immune support against opportunistic microbes. Olive leaf’s multifaceted effects on the immune system include the ability to stimulate phagocytosis (an immune response against harmful microbes) and neutralize production of reverse transcriptase and protease enzymes that can adversely alter the ribonucleic acid (RNA) of healthy cells.*[16-18] Oleuropein, a bitter glycoside that was isolated from olive leaf in the late 19th century,[19] was found to be further hydrolyzed in the body to elenolic acid, which is believed to be its most active component. Research reveals that both olive leaf extract and oleuropein exert positive immune effects, but olive leaf acts in a dose-dependent manner; that is, the greater the dose of olive leaf, the greater the inhibition of microbial replication.[17] Immune Essentials provides concentrated olive leaf extract that is standardized to 20% oleuropein, while less concentrated formulas are standardized to as little as 6% oleuropein.* Vitamin C (as ascorbic acid) is a well-known antioxidant and plays an important role in immune support.[20] While most mammals are able to synthesize ascorbic acid, humans are unable to. They can quickly become depleted if intake is inadequate or requirements are increased due to exposure to stress, smoking, pollution, and temperature changes.* Vitamin C supplementation has been studied for more than six decades with respect to moderating the severity or duration of acute immune challenges. Benefits are most notable in cases of extreme physical stress.[20] A Cochrane Review examined 65 years of placebo controlled studies (55 studies) in which at least 200 mg of vitamin C was administered. Within three meta-analyses, in a subgroup of six studies, vitamin C reduced signs of acute immune challenge on an average of 50% in marathon runners, skiers, and soldiers that had been physically stressed or exposed to cold temperatures.*[21 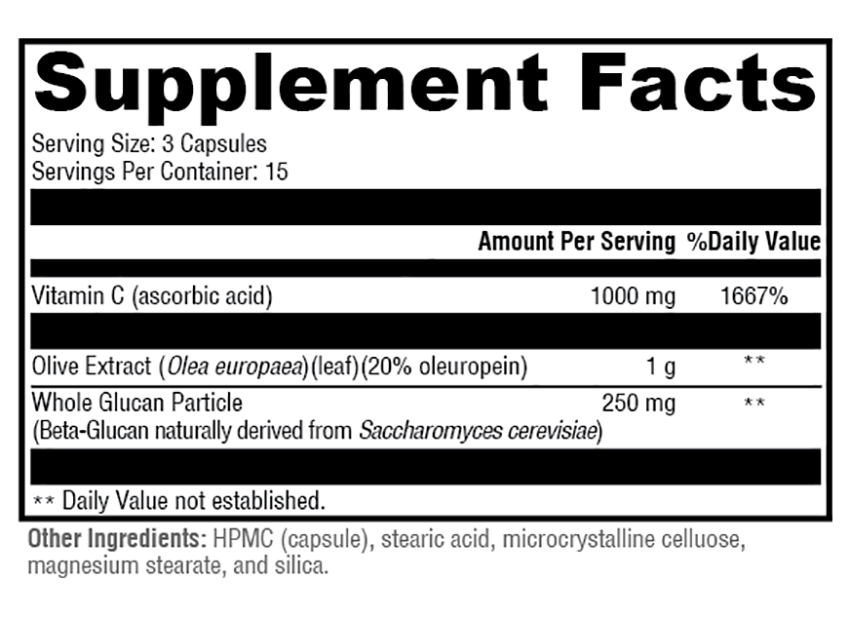