Melatonin Control is a vegetarian formula with a biphasic delivery system that releases melatonin quickly and then steadily. Melatonin is naturally produced in the pineal gland in response to changes in light exposure; it helps promote healthy sleep patterns as well as antioxidant and immune activities. Melatonin Control can support these functions by helping to maintain normal levels of melatonin in the body.*

Melatonin is a neurohormone produced from tryptophan by the pineal gland when it is stimulated by darkness. While melatonin regulates many other hormones; its primary function appears to be regulation of the body’s daily and annual biological rhythms.* Oral supplementation has been shown to have some benefit with regard to time to sleep onset, total sleep time, and sleep efficiency.[1] Noteworthy advantages over pharmaceutical sleep aids are improved performance upon wakening and the absence of memory impairment. [2,3] According to studies, daytime melatonin supplementation by travelers crossing time zones and/or shift workers also promotes sleep.*[4] Research has shown that melatonin not only fights free radicals during sleep, but also stimulates the body’s own antioxidant systems. For example, it reduced harmful oxidized cholesterol (LDL) in postmenopausal women.[5] Melatonin’s antioxidant capacity also accounts for its role as a neuroprotectant. By delivering antioxidant benefits and correcting the circadian rhythm, melatonin could support cognitive function.*[6,7] A decrease in plasma melatonin correlates with a decline in immune function in some individuals beginning around the age of sixty. Interestingly, lymphoid cells are an important physiological source of melatonin in humans.The hormone appears to stimulate production of T helper (TH) cells and their release of interleukin-2, gamma interferon and opiod peptides.[8] Considering the decline in melatonin synthesis with age, exogenous supplementation with the hormone has long been of interest in anti-aging protocols.*[9,10] The addition of pyridoxine in this formula supports the biosynthesis of melatonin and may also enhance dream recall.* The biphasic delivery system consists of 1mg of melatonin in the coating solution and the remainder in the tablet core. The melatonin in the coating solution is immediately released upon digestion. The melatonin in the tablet core is released over a 6-hour period. The tablet core contains a tableting agent, hydroxypropyl methylcellulose that works by forming a gel layer when hydrated. This gel layer acts as a diffusion barrier to control the rate of release of the melatonin in the tablet core. As the tablet travels through the intestine, the gel layer slowly erodes to release the melatonin, which then is available for absorption in the intestine.* 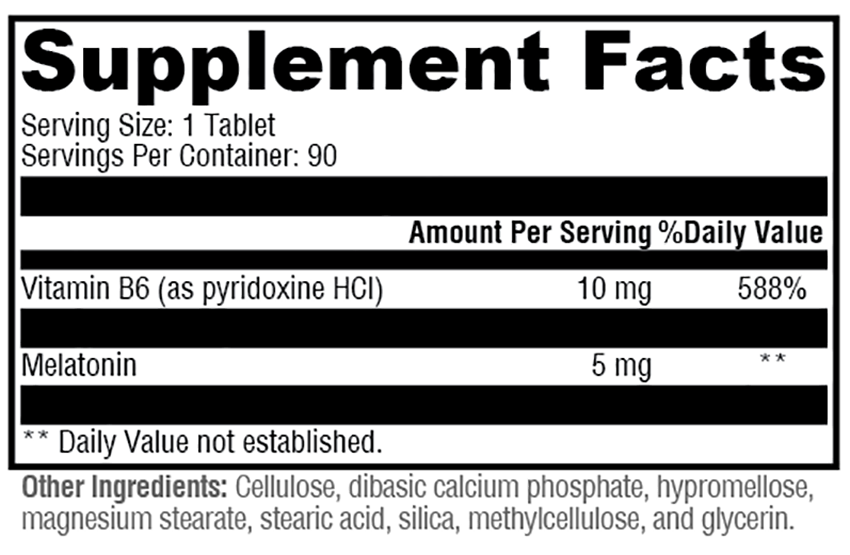