Melatonin is produced naturally in the pineal gland of the brain in response to changes in light exposure; it helps maintain healthy sleep patterns as well as antioxidant and immune activities. Melatonin can be taken as a supplement to support these functions by promoting normal levels of melatonin in the body.*

Melatonin, a naturally occurring indolamine, is produced primarily in the pineal gland but also in mammalian bone marrow, platelets, gastrointestinal tract, eyes, skin, and lymphocytes.[1] It plays a vitally important role in regulating the body’s daily and annual biological rhythms and thus the sleep/wake cycle. Research suggests that melatonin supports antioxidant activity, cardiovascular health, and immune function as well.*[2-4] Normal melatonin secretion is suppressed by light and stimulated by periods of darkness. Nocturnal secretion of melatonin is at its highest during childhood, and then decreases with age. Studies, including meta-analyses, suggest that supplemental melatonin supports desirable sleep patterns in certain individuals, including the elderly and those who have unusual work hours, such as night shift workers or people traveling across time zones.[5-10] A review of 10 trials suggests that melatonin supplementation helped support sleep patterns in individuals crossing time zones; subjects included airline passengers, airline staff, and military personnel.[11] Daily doses between 0.5 mg to 5 mg taken at bedtime were used and found to be similarly supportive; however, the effects were greater at the higher dose. According to this review, doses higher than 5 mg do not appear to demonstrate any increased benefit.* Human research studies suggest that melatonin supports the quality of healthy sleep as it relates to falling asleep, sleep efficiency (percent of time asleep to total time in bed), and awakening. In one study employing five experimental periods, melatonin appeared to positively support normal sleep initiation, maintenance, efficiency, and activity within one week of supplementation versus placebo.[5] Another randomized, double-blind, placebo-controlled study of 33 individuals over a 16-day period suggested that the onset, quality, depth, and duration of sleep can be supported by melatonin supplementation without the occurrence of daytime drowsiness or adverse effects.*[12] Melatonin has been closely studied for its role in supporting antioxidant activity, especially since intracellular melatonin is concentrated in the mitochondria, a major site of oxidative metabolism. Melatonin has been found to support extracellular antioxidant activity, support glutathione production, and stimulate production of intracellular antioxidant enzymes—including superoxide dismutases and glutathione peroxidase.[3] Research suggests that melatonin works on a number of levels. It is able to scavenge oxygen based and nitrogen-based free radicals, and support the natural response to inflammation by promoting cytokine balance.[2] As a lipophilic molecule, melatonin is able to permeate the lipid portion of low-density lipoprotein (LDL) and support antioxidant activity in cells. Research suggests that melatonin supports blood pressure already in the normal range and overall cardiovascular health.*[3] Finally, research suggests that melatonin aids immune system activity by supporting T-helper cell function, immune-specific progenitor cell production, cytokine balance, and production of mediators, such as gamma-interferon and immune-supportive interleukins.*[1,2,4,13] Melatonin SL offers melatonin in a convenient form that provides 3 mg per lozenge, sweetened with xylitol, mannitol, and natural peppermint flavor, to support healthy sleep patterns, antioxidant activity, cardiovascular health, and immune function.* 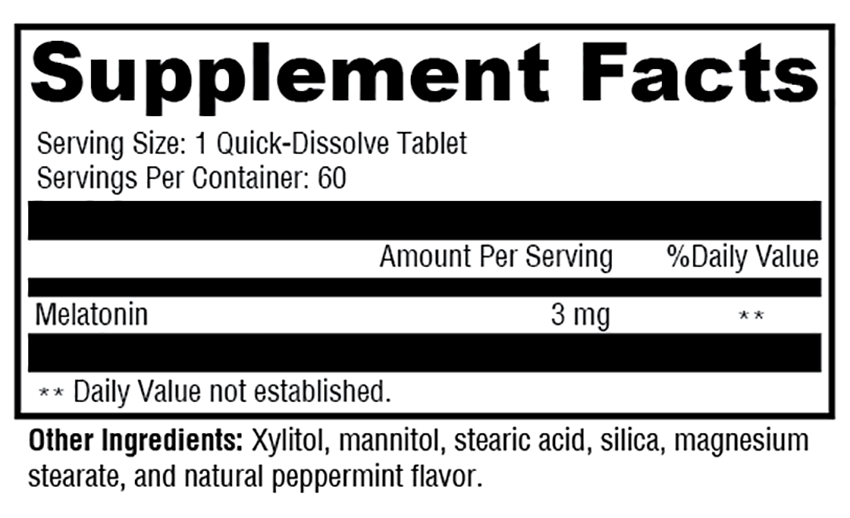 Be the first to review “Melatonin SL” Cancel reply