Methyl S/T is a sweet, yet slightly tart lemon-flavored powder. SAMe (S-adenosyl-L-methionine) and TMG (trimethylglycine) are naturally occurring substances that act as methyl donors during vital biochemical processes in the body. Methylation is essential to normal cell health and function. It can decline with age or chronic alcohol consumption, and it can be limited in some individuals due to their genetic makeup.

SAMe donates methyl groups, which are needed for the synthesis of neurotransmitters, proteins, nucleic acids, and phospholipids. It supports glutathione production, liver health, joint comfort, and a healthy mood. TMG is an especially important methyl donor involved in the metabolism of homocysteine and the formation of SAMe. TMG ultimately supports cardiovascular and neurological health, as well as normal cell-life regulation.

Methyl S/T’s formulation contains a minimum of 70% of the SS isomer of SAMe, the active form the body can use most readily. This concentration makes SAMe & TMG cost effective as most SAMe formulations on the market contain less than 44% active SS isomer.

S-adenosyl-L-methionine (SAMe) is a naturally occurring substance formed in the body from the amino acid methionine and the “energy molecule” adenosine triphosphate (ATP). Formation of SAMe is catalyzed by methionine adenosyltransferase and depends on cofactors including vitamin B6, vitamin B12, folate, and magnesium. SAMe has been studied as a supportive nutrient in liver health, joint comfort, metabolic reactions, and healthy mood.[1-4] Methylation SAMe is the “universal” methyl donor for biochemical reactions throughout the body.[5] This methyl transfer, or “transmethylation,” is critical to reactions involving proteins, phospholipids, DNA, RNA, creatine, hormones, development of cell membranes, degradation of histamine, and formation of norepinephrine and dopamine. [1,6] Eighty-five percent of transmethylation takes place in the liver, and healthy SAMe levels appear to be essential to liver health and function.[2,7] Antioxidant and Liver Support SAMe is considered to be “critical” for synthesis of glutathione, a principal component of antioxidant and detoxification systems in the body.[1] Following donation of a methyl group, SAMe is converted to S-adenosylhomocysteine (SAH). This biochemical reaction promotes the transsulfuration pathway in the liver that generates glutathione. Further metabolism of SAH involves trimethylglycine (TMG), also known as betaine anhydrous. TMG plays an important role in maintaining a healthy SAMe:SAH ratio in the liver. During a national symposium, the roles of SAMe and TMG in supporting liver health were reviewed with a focus on their participation in the vital processes of transmethylation and transsulfuration, their ultimate contribution to increased glutathione synthesis and its hepatoprotective effects, their promotion of a balanced SAMe:SAH ratio, their activation of phosphatidylethanolamine methyltransferase, and the increase in phosphatidylcholine synthesis as a result of their administration.[8] Ongoing animal studies suggest that SAMe supports liver health[9,10] and that exogenous SAMe may positively affect cell-life regulation of hepatocytes.[7] In certain human cohorts, researchers recommend further research into combining SAMe with nutrients such as vitamin B6 to optimize outcomes.[5] Healthy Mood Supplemental SAMe appears to support a healthy mood, possibly due to its active role in methylation and its involvement in the formation of monoamine neurotransmitters.[3,11-13] Meta-analysis of earlier studies suggested that SAMe showed greater support of a healthy mood when compared to placebo with an effect comparable to that of other treatments.[14] A 30-day, double-blind, placebo-controlled, randomized study of 80 women suggested that there was a significant improvement in mood after the women received an oral dose of 1600 mg/d of SAMe compared to placebo.[15] Another study of 143 subjects who received an oral dose of 1600 mg/d of SAMe suggested that SAMe yielded positive results that were comparable to other treatments for supporting a healthy mood, but SAMe was better tolerated.[16] In a small (N=26), four-week, double-blind, randomized protocol comparing oral SAMe with other treatments, 62% of the SAMe group showed significant improvement in mood. The study revealed a significant correlation between plasma SAMe levels and the degree of healthy mood support, regardless of treatment type.[17] TMG Trimethylglycine is a naturally occurring compound (glycine attached to three methyl groups) that is found in food (estimated intake 0.5-2 g/d) and can be produced in the body from the precursor choline.[18] TMG is thought to protect liver cells, support homocysteine metabolism and cardiovascular health, and may also support a healthy mood due to its role in SAMe metabolism.[3,9,18,19] When TMG donates a single methyl group, it is converted to dimethylglycine (DMG), which is capable of donating two methyl groups. TMG is thought to stimulate activity of the enzyme betaine-homocysteine methyltransferase (BHMT). BHMT, found in abundance in a healthy liver,[20,21] is used by TMG to donate a methyl group to homocysteine. Once TMG adds a methyl group to homocysteine to produce methionine, the methionine can then be converted to SAMe. A randomized, double-blind, crossover study of healthy volunteers suggested that TMG supplementation (at doses of 3 g and 6 g/d) has a dose-dependent effect on serum TMG levels and a significantly positive effect on maintaining healthy homocysteine levels.[22] Together, SAMe and TMG provide an abundant source of methyl groups and ultimately support a wide variety of biochemical reactions in the body. SAM-e contains a minimum of 70% of the SS isomer of SAMe, the form the body can use most readily. This relatively high concentration from Gnosis’ Adomix® not only makes SAM-e particularly bioavailable but also cost-effective. Each capsule is sealed in a nitrogen-purged blister pack to maximize protection from the environment. 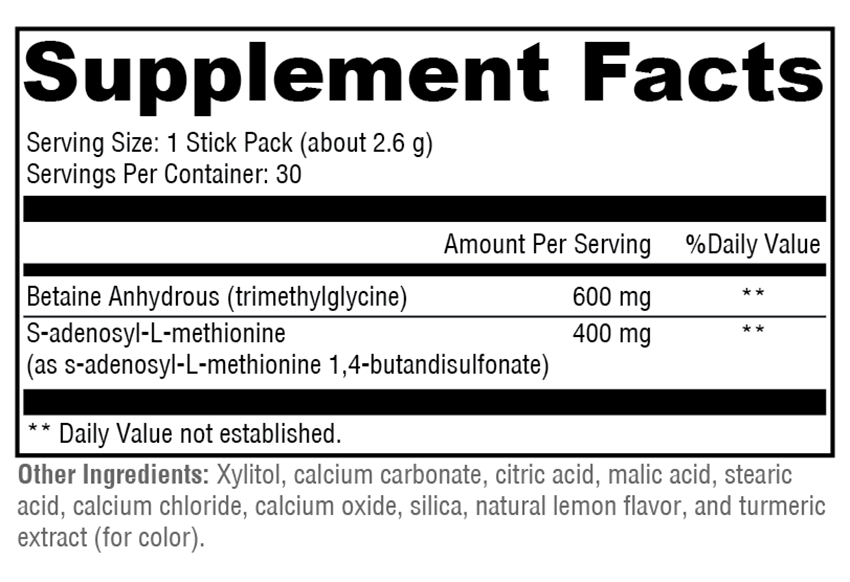