Busy and stressful lifestyles can cause sleep patterns to become disrupted, leading to over-stimulation and restlessness. Gamma-aminobutyric acid (GABA) is the brain’s primary neurotransmitter which helps to counteract stress by promoting a sense of relaxation. In the evening, GABA activity should increase in the brain, triggering the sleep cycle. The ingredients in Snoozzz work in synergy to support GABA activity and allow for optimal relaxation.

Snoozzz includes valerian root, a well-known herb used to help with sleep-related issues and to produce a state of relaxation. Passionflower and jujube have been used historically to produce a state of relaxation, and have been used in those with overstimulation and scattered thoughts. L-theanine, an amino acid found in green tea, supports resilience to stress by increasing alpha brain wave activity. Two capsules of Snoozzz include 450 mg valerian root extract, 200 mg jujube seed extract, 150 mg passionflower extract, 150 mg L-theanine and 100 mg hops strobile extract.

Valerian root extract is perhaps the most studied botanical for inducing sleep. Valerenic acid, an active component in valerian root, has spasmolytic or muscle relaxant properties. It has been found to both inhibit the reuptake of and stimulate the release of GABA in the central nervous system (CNS). In addition, other components within valerian have been found to bind to GABA receptors. Randomized trials consistently show significant benefits to supplementing valerian over placebo. One randomized, double-blind, placebo-controlled trial comparing 600 mg/day of valerian extract given with another therapy for six weeks showed valerian root extract to be equally effective in supporting sleeplessness as a traditional approach.

The aerial portions of passionflower are best known for their historic use as a relaxing and calming herb. Numerous flavonoid components function as active ingredients by binding to the GABA receptor. Passionflower extract has compared favorably with other therapies with similar mechanisms of easing feelings of overstimulation and scattered thoughts, with fewer side effects. A randomized, placebo-controlled trial of 60 people, aged 25-55 years and scheduled for spinal anesthesia, showed those given passionflower experienced a greater sense of calmness before being given anesthesia. Passionflower has also been shown to offer sleep benefits for adults with fluctuations in sleep quality.

L-theanine is an amino acid found in green tea, and is considered a relaxant (although not a sedative) when used alone. The Food and Drug Administration has approved several health claims for L-theanine including: stress reduction, relaxation without drowsiness, decreased nervousness from common fatigue, and reduced nervous irritability. L-theanine has been shown to significantly increase alpha brain wave activity which correlates with a perceived state of relaxation.

Wild jujube seed has been historically used in traditional Chinese medicine as a sedative herb. It has been shown to reduce stress, conserve energy and promote sleep. It is useful for those with symptoms of nervous exhaustion, fatigue, irritability and the inability to sleep (Note: Most research on the active components [jujubosides A and B] for sedative and CNS function has been performed in China and are written in Chinese).

The hops plant, Humulus lupulus, is a perennial climbing vine that has been used for centuries for its relaxing properties, among other health benefits. Only the female hops, which produce flowers known as strobiles, are used for medicinal purposes. The active ingredients in hops include a volatile oil, valerianic acid, tannins and flavonoids. European studies have examined the effects of hops in combination with other sleep-supporting botanicals. In a pilot study that included 30 subjects with mild-to-moderate sleep challenges, a preparation combining 500 mg of valerian extract with 120 mg hops was given to subjects 30 minutes before bedtime. The hops-valerian preparation was found to improve sleep quality by decreasing sleep latency and wake time throughout the night. 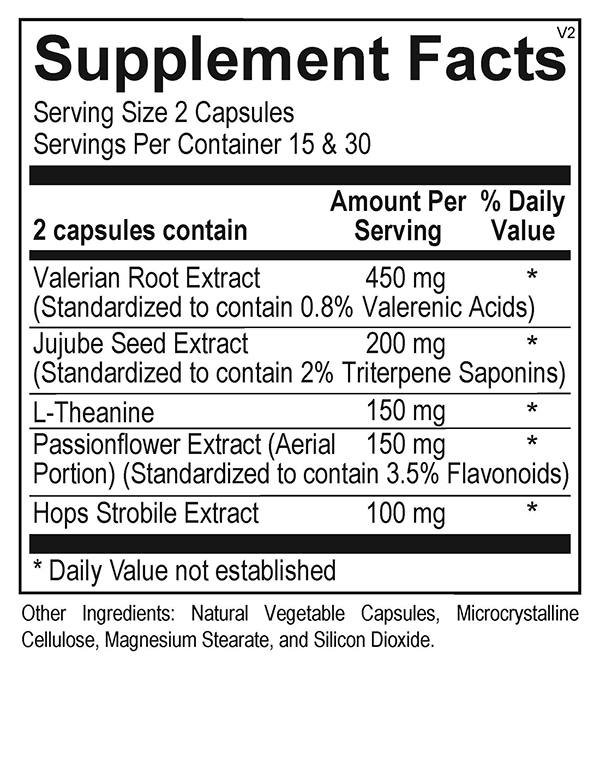