A sufficient intake of minerals is important for the production of energy; the synthesis of blood, bone, and hormones; the immune system; enzyme function; and reproduction. Furthermore, balance—or the ratio of one mineral to another—is key to mineral utilization. Bioavailability is perhaps the most important consideration when selecting a formula containing minerals. The body transports minerals across the intestinal wall by bonding (or chelating) them to amino acids. To increase bioavailability of supplementary minerals, special processing is needed to create a stable bond between the minerals and the amino acids. Albion Laboratories uses patented processes to assure bond stability.[1] The result, it has been demonstrated, is that the bioavailability of Albion’s chelates is superior.[2] Some other products on the market, which are purported to be chelates, are merely mixtures of proteins and minerals that lose stability during digestion and consequently have lower bioavailability. Many of the minerals in T/M Plus are bound to dipeptides. This combination appears to improve absorption by enhancing the minerals’ transport across the intestinal wall.[1] Three very important features of the chelated minerals in T/M Plus assist in absorption: (1) the absence of an electrical charge, which renders them less likely to interact with other dietary substances such as phytates, other vitamins and minerals, or medications; (2) small molecular weights that facilitate transport across the intestinal mucosa; and (3) the chelates remain intact and stable throughout the ranges of pH in the digestive tract. The minerals in T/M Plus differ from those in many formulas in that they are bound to the ligand, glycine. Unlike the ligand picolinic acid, which gets excreted unchanged in the urine, the amino acid glycine has nutritional value. This means that 100% of the mineral/amino acid compound has nutrient value.[3] Another reason why T/M Plus stands apart from other mineral formulas on the market is because it contains malic acid, lithium, and vanadium. Malic acid participates in the energy production cycle. A double-blind, placebo-controlled, cross-over pilot study using 400 mgs of malic acid three times a day (approximately the same amount as in T/M Plus) along with magnesium supported feelings of wellness in subjects’ joints, muscles, tendons, and other soft tissues.[4] Swedish researchers noted that a reduced content of high-energy phosphates in the muscles of some patients could be contributing to the muscle energy deficits experienced by these patients.[5] Because of malic acid’s role in energy production, NADH (which yields three ATPs) is formed and may therefore support muscle energy production. Malic acid is also thought to increase energy levels in healthy humans. Lithium and vanadium are known as ultra-trace elements. As yet, neither a requirement for ultra-trace elements, nor deficiency symptoms have been demonstrated in humans. Animal research suggests vanadium has important interactions with magnesium.[6] It also appears to have positive effects on insulin and glucose metabolism.[7] Lithium is thought to help regulate the neurotransmitter glutamate by keeping the amount of glutamate between brain cells at a stable, healthy level.[8] Lithium doses somewhat higher than those in this formula are used by some practitioners to support healthy brain function. These ultra-trace minerals, as well as some of the others, could have very narrow margins between what are useful and what are toxic doses. According to Jeppsen et al, in their presentation at the 6th International Symposium on Chelating Agents in Pharmacology, Toxicology and Therapeutics, Albion amino acid chelates are less irritating than other forms of inorganic mineral supplements.[9] Strenuous exercise is thought to increase mineral loss via urine, sweat, and metabolic demand. In addition to electrolytes, the minerals copper, iron, and especially magnesium and zinc appear to be prominent minerals that are impacted by exercise or have important roles in performance.[10-12] Mineral supplements may therefore be beneficial for people who engage in strenuous exercise or physically demanding sports. 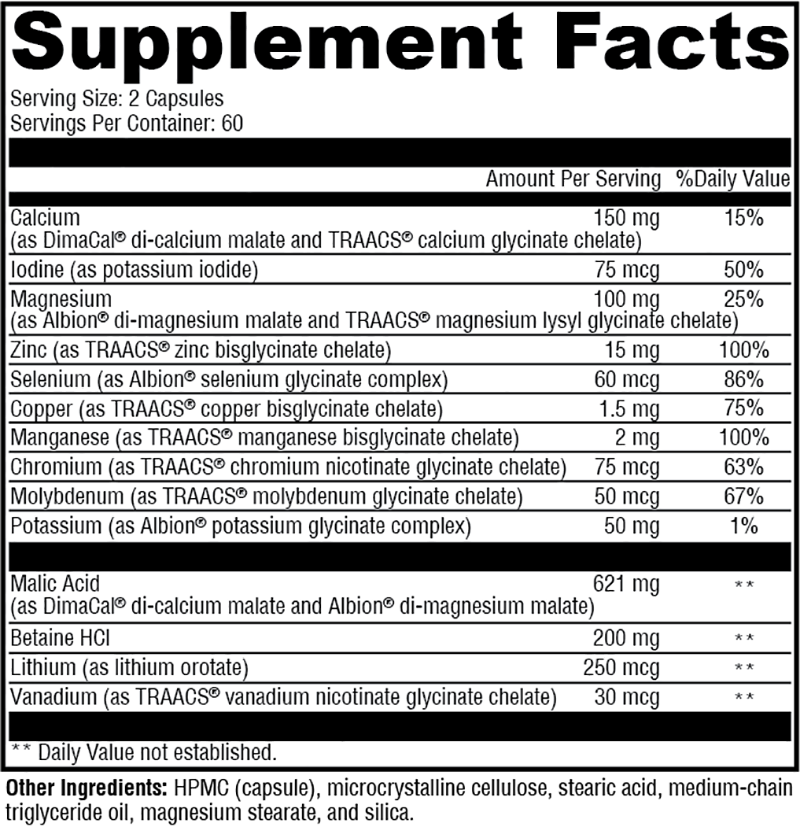